World’s biggest truckmaker steps out of the shadow of Mercedes

In the early months of his 2012 re-election campaign, a jacketless Barack Obama stood in front of a natural-gas-powered truck at a plant in North Carolina. What the US needed, he told the crowd, was more such “American fuel-efficient trucks” to reduce the country’s dependence on oil, and protect its businesses from volatile commodity prices. The company that the president had chosen to visit, Daimler Trucks, was then and remains the leading heavy-duty vehicle manufacturer in North America, and the biggest in the world.

It has been producing trucks for 125 years, and in the decade since Obama’s speech, has put more non-diesel vehicles on the road than most of its competitors, bar China’s BYD. Yet while upstart rivals Tesla and Nikola, neither of which have delivered a single zero-emissions truck to date, reached eye-watering market valuations in part because of their electric and hydrogen truck ambitions, investors have hardly given Daimler a second glance. “Sometimes we would have liked to have a little bit more of [the] limelight,” admitted Martin Daum, who was at Obama’s side at that event, and who has led the German truckmaker since 2017.

Being part of a group containing the far more glamorous Mercedes-Benz carmaker, he acknowledged, meant the division was often overlooked.

You are seeing a snapshot of an interactive graphic. This is most likely due to being offline or JavaScript being disabled in your browser. 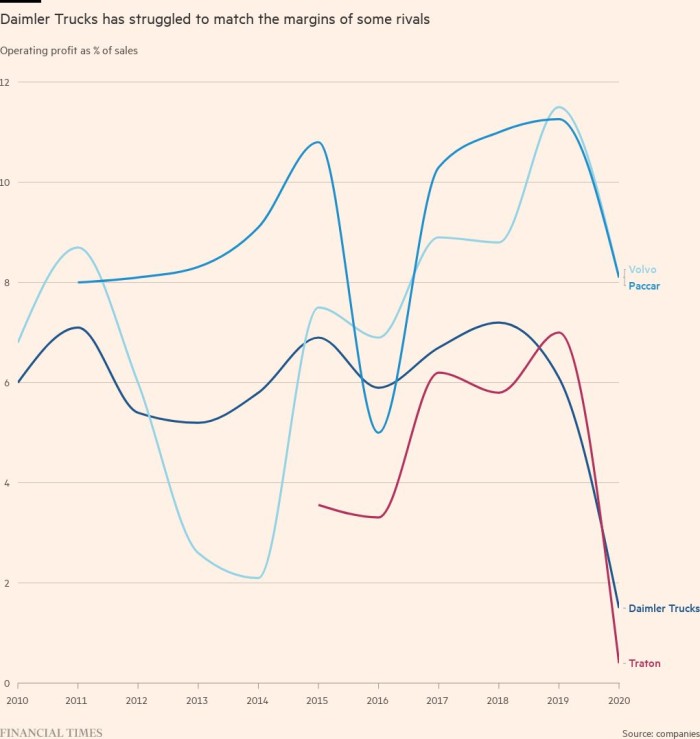 This is about to change. Seeking to transform itself into a luxury, fully-electric carmaker, Daimler will spin off its trucks business on December 10, floating 65 per cent of the unit on the Frankfurt stock exchange.

The business is likely to enter Germany’s flagship Dax index alongside its former owner, henceforth to be known simply as Mercedes-Benz. Unlike VW’s spin-off of its truck unit Traton in 2019, when the parent group kept close to a 90 per cent stake, Daimler Trucks’ large float exposes it to intense scrutiny. In particular, its lacklustre profit margins, rather than electrification plans, will “now be much more closely focused on”, said Kai Mueller, Barclays analyst.

Investors, he added, know that in this industry, “scale is important, but operational efficiency even more so”. Some of Daimler Trucks’ recent figures do not make the best reading. It sold almost 489,000 vehicles in 2019, more than its two nearest competitors, Volvo and Traton-owned Scania, combined.

Yet these two rivals achieved operating margins of about 11 per cent in the last pre-pandemic period, while Daimler Trucks managed just over 6 per cent. The high costs of its European operations, which have dragged on earnings for several years, continue to weigh on the business.

The existing company structure meant management at the unit rarely had to answer for its underperformance, according to Michael Muders, a portfolio manager at Union, a Daimler group top-15 shareholder. “These guys did not sit in front of investors, it was always the Daimler chief financial officer, who said: ‘Of course the results are no good, but we are working on improving that’.”

“There was no follow-through, no direct accountability,” said Muders, who is supportive of the spin-off, adding that given the healthy profits generated by Mercedes’ premium SUVs, “there was no need to be very aggressive and really turn the truck company around”. Talking to the Financial Times, Daum challenged the claim that the trucks division was always a burden on Daimler. But he has nonetheless been attempting to alter the perception that the heavy-duty behemoth is resistant to reform.

“We’ve got all the ingredients,” he insisted during a four-hour pitch to investors this month, before senior executives answered questions from analysts and reporters on everything from school buses, to software and battery technology. “In an average market environment, we want to aim for [profit margins of] 8 to 9 per cent,” he said, referring to the truck sector’s bumpy business cycle, which ebbs and flows with the global economy. “In sunny conditions, we aim to deliver more than 10 per cent.” Achieving that goal will hinge on whether Daimler Trucks can make big changes to sites in Europe, especially in its home country, Germany.

In 2019, Mercedes-Benz Trucks, the company’s Europe and Latin America division, was barely profitable, with a margin of 0.4 per cent, compared with 11.5 per cent for North America. Even though demand has soared after the worst of the pandemic, the unit’s profit margin is a mere 4.5 per cent for the nine months to September. Karin Radstrom, a former Scania executive who was brought in this year to turn round the division, is clear about the diagnosis. “Our costs,” she said, “are too high to carry the business.”

Further job cuts in Germany, as part of a programme to reduce costs by 15 per cent across the group, will be necessary, said Radstrom, as will slimming down the number of models. Daimler’s bigger challenge, however, will be convincing investors that it can master the post-diesel future, by accelerating the rollout of electric and hydrogen-powered trucks and buses. There are already about 40 Daimler electric trucks on the road in North America, with more than 1m miles on the clock in total.

The company, which Bernstein estimates could be worth as much as EUR46bn post spin-off, has also formed a joint venture with Volvo to develop hydrogen fuel cell systems. The hype, however, is reserved for the much newer start-ups with their grand promises of transforming transportation. “David slays Goliath is always a better headline,” said Daum, pointing out that corporate clients need the “total cost of ownership” of zero emission trucks — the cost of buying and running the truck over its lifetime — to reach parity with diesel models before the market can really take off.

You are seeing a snapshot of an interactive graphic.

This is most likely due to being offline or JavaScript being disabled in your browser. 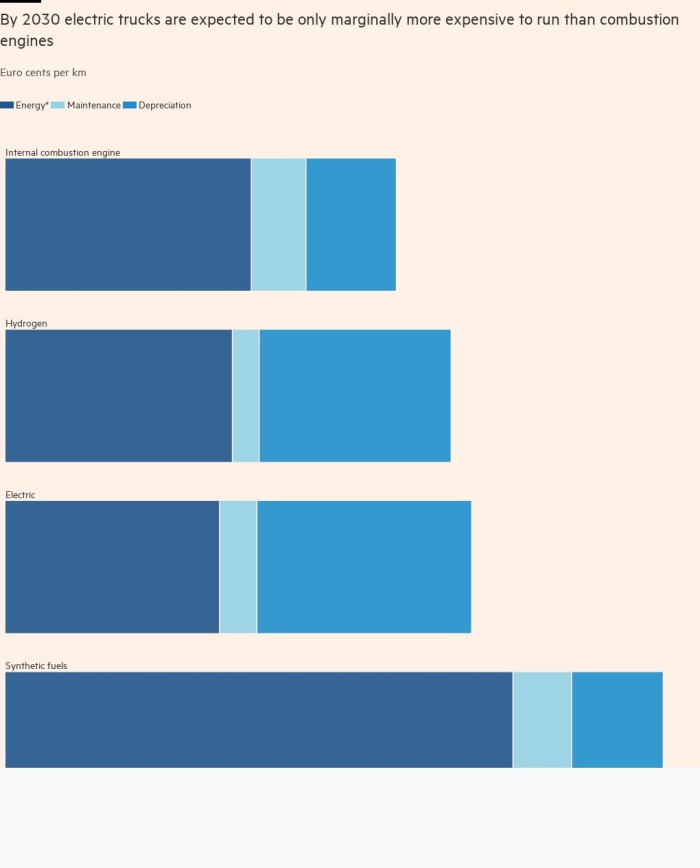 Daimler does not expect that point to be reached before the second half of the decade, and even that timeline is dependent on regulatory conditions and the expansion of charging networks and fuelling stations. Daum, who has spent more than three decades in the business, knows the pitfalls of running ahead of consumer demand. “We had a fuel cell bus already 15 years ago,” he recalled. “Unfortunately, nobody wanted to buy it”. He does not directly criticise newcomers to the industry, but made a point of citing a question from a reporter in 2017, who asked why it would take until 2021 for Daimler to launch its battery-powered eActros when Tesla’s Semi truck would be built in 2018.

“We launched our electric Actros in 2021,” he quipped.

The Semi, meanwhile, has yet to hit the road.